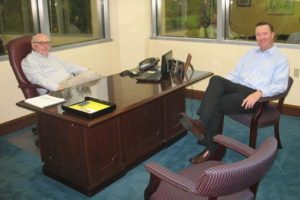 A new professional partnership focused on high ethical standards is expanding one of the regions true niche companies.

Jerry Thier, president of PMJ Productions, has announced that Daniel Haggerty has joined the firm as vice president. The company, based in the Abington Executive Park, specializes in the complex processes associated with buying and selling companies, including valuation of the organizations being offered for sale.

PMJ was launched in 1992 as a response to varied professional successes scored by Thier. He had originally been involved with corporate market research, but later decided to go the entrepreneurial route in the food industry, a stint that included ownership of the Williams Baking Company.

After I sold out, I faced the question of what to do next, says Thier. I certainly did not want to go back to the corporate world.

Thier then successfully worked as an entrepreneur and business owner in the medical products industry, which was followed by yet another major career decision when he was in his mid-50s he almost went to law school at Tulane University.

I changed my mind about this route, says Thier. I also realized that true entrepreneurs work better than they play.

With an extensive career resume that included CEO experience plus exposure to the buying and selling of businesses, Thier once again called upon his entrepreneurial skills. The creation of PMJ resulted, and he set out to exploit a little-known but lucrative niche in the regional market place.

I thought this decision was a natural, because I had seen all sides of selling a business and I didnt need a large staff (to run such a company), says Thier. I also could speak the language of lawyers and accountants.

The rigorous work necessary to achieve due diligence remains a big part of the various services offered by PMJ. The company consistently represents sellers, and aids owners in offering their businesses for sale. Functioning from the other side of the desk, PMJ can also serve as a buyers consultant.

Ive been in operations for my entire life, says Thier. I see a business as a living and breathing entity and can advise a prospective buyer on whether or not its prudent to proceed.

PMJ will also help buyers search for a business with the synergy that will match the operational mode of that entrepreneur. Additionally, after substantial research, business valuations can be calculated to achieve a price that serves as a starting point in any sales negotiations.

This segment of PMJs business, like the others, requires extensive due diligence. Sometimes, Thier may be asked to value a business as part of an estate or a domestic dispute. These complex valuations involve an examination of the business units financial history, tax returns, profit and loss history, and cash flow. Thier will also evaluate prospects for the companys specific line of work and evaluate comparable sales of similar business units.

He emphasizes that the services offered by PMJ can be considered more of an art than a science. A feel for business is required plus the ability to interface with a wide variety of business people from varying environments who have achieved varying degrees of education.

Our companys greatest strength is that we can see the whole picture, says Thier. We therefore can bring together buyers and sellers.

Thier is generous in his praise for Mr. Haggerty. The new vice president is bringing extensive business experience, and both an MBA and a law degree to PMJ plus a vital compatibility to Thiers mode of operation.

Ive been successful working within a stringent set of ethics and morality, and I know Daniel operates the same way, says Thier.

Haggerty will operate in a market where PMJ specializes middle market business sales. PMJs diversity has included the sale of a sizable transportation company to a British interest that already operated 62,000 buses, as well as the sale of a company that employed less than 10 people to a 42,000-employee firm looking for specific market access.

The expanded PMJ will also deal with a wide variety of people. Thier notes that some prospective entrepreneurs now migrate from the corporate world, where they became disillusioned or were downsized. What these people are doing is buying a job, says Thier.

One of the greatest obstacles facing PMJ in the aftermath of the Great Recession involves the availability of financing for business buyers. Thier explains that buyers, as well as sellers, must understand what will appeal to more cautious bankers. Moreover, creative financing, such as the use of 401(k) retirement packages or SBA loans, can be useful.

From my standpoint, this is very interesting work, and our business has not suffered from the recession, in part because we have superior name recognition, adds Thier.

Haggerty explains that his experience helping to run the Times-Shamrock family of media outlets was incredible, but he wanted to strike out on his own. Finding an opportunity to either start or buy his own business seemed to be the best option.
Based on Jerrys reputation, I called him first, says Haggerty. I went to his office, where we both realized my best option was for us to get together.

The conversation shifted to creation of an evolving partnership and both men identified Haggertys legal and business background as a good match for Thiers skills. Haggerty was also impressed with the respect that Thier has earned over the years, as well as his accomplishments as a broker.

I could have just hung out a shingle and started a new business, but I believe its better to learn from a true professional such as Jerry and his network, says Haggerty. Development of a partnership between us is the best scenario I could have hoped for.

We are here to help

Be the first to get updates and more!
Scroll Back to Top